About Me and my Love for Newfoundland Dogs

This page is all about me and how I have the knowledge to advise others about Newfoundland Dogs. 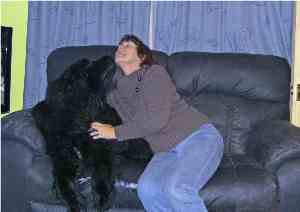 Many, many years ago, a dear friend told me she would love a Pyrenean Mountain Dog. I had never heard of them then, but having seen one, I decided then and there that I would love a dog that size.

In 2006 I lost my beautiful golden retriever, Sammy, at the age of fourteen. I am one of those people who just have to have a dog about the place. Home is not home without one.

What I missed more than anything was the wonderful greeting that you only get from a dog. Even though Sammy's legs had completely let him down, he still thumped his tail against the floor when he heard me come in.

Remembering my earlier wish to have a giant dog, I started to research them.

Many giant dogs have a short lifespan and I thought they were all the same, until I found Newfoundlands. Their lifespan is between 10 and 12 years, much like any other large dog breed. I confirmed this by email with the Newfoundland Club

So I began to look into them more closely. You should never, ever buy a dog for its looks alone, so I wanted to be quite sure that this was the breed for my son and I. 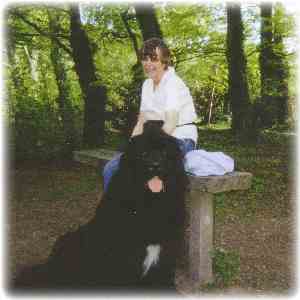 Being such an enormous dog, the last thing I wanted to do was make a mistake in temperament.

This is what I learned. They are universally known as the Gentle Giant, they have the gentlest nature, love children, and get on with all other animals, be they small or large.

That was over five years ago and I have never looked back. I bought my second newfie three years ago, from the same breeder. Admittedly he has had a lot of health problems, despite having all the tests and being of champion stock, but I wouldn't trade him for the world.

Having a dog is a bit like marriage - you have to see it through, in sickness and in health!

From About Me to Gentle Newfoundland Dogs
My Author site