The famous poet is reputed to have said at the time: "he expired in a state of madness on the 18th after suffering much, yet retaining all the gentleness of his nature to the last; never attempting to do the least injury to any one near him. I have now lost everything"

The poet is reported to have nursed the dog throughout his illness, without fear of being bitten and contracting the awful disease himself.


Near this Spot are deposited the Remains of one who possessed Beauty without Vanity, Strength without Insolence, Courage without Ferosity, and all the virtues of Man without his Vices. This praise, which would be unmeaning Flattery if inscribed over human Ashes, is but a just tribute to the Memory of BOATSWAIN, a DOG, who was born in Newfoundland May 1803 and died at Newstead Nov. 18, 1808. 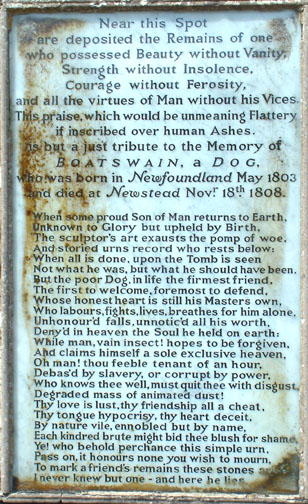 When some proud Son of Man returns to Earth,
Unknown by Glory, but upheld by Birth,
The sculptor's art exhausts the pomp of woe,
And storied urns record who rests below.
When all is done, upon the Tomb is seen,
Not what he was, but what he should have been.
But the poor Dog, in life the firmest friend,
The first to welcome, foremost to defend,
Whose honest heart is still his Master's own,
Who labours, fights, lives, breathes for him alone,
Unhonoured falls, unnoticed all his worth,
Denied in heaven the Soul he held on earth -
While man, vain insect! hopes to be forgiven,
And claims himself a sole exclusive heaven.
Oh man! thou feeble tenant of an hour,
Debased by slavery, or corrupt by power -
Who knows thee well must quit thee with disgust,
Degraded mass of animated dust!
Thy love is lust, thy friendship all a cheat,
Thy tongue hypocrisy, thy heart deceit!
By nature vile, ennobled but by name,
Each kindred brute might bid thee blush for shame.
Ye, who perchance behold this simple urn,
Pass on - it honors none you wish to mourn.
To mark a friend's remains these stones arise;
I never knew but one - and here he lies.

In his Will, executed in 1811, Byron instructs that he be buried in the vault with Boatswain. In fact the dog's tomb at Newstead Abbey, is bigger than Byron's own.