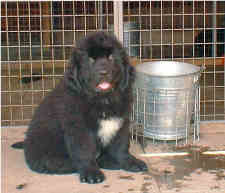 After I had first spoken to the breeder about the puppy, they sent me this photograph by email. That was all I needed to decide he was going to be Ferdinand. The name just popped into my head out of nowhere - he just looked like a Ferdinand!

Little did I know that there was some big football match going on that year and I got a little sick of people asking me if I had named him after the footballer. What footballer? I know nothing about football or any other sport.

I managed to shut them up eventually by replying that I had named him after Ferdinand of Aragon, 16th century king of Spain. I didn't, of course, but it was an intellectual reply which managed to stop people asking me about a footballer!

Of course, he has always been Ferdie. He is only Ferdinand when I hear him getting on the worktop or stealing cups off the counter!

Up until the day before I was due to collect Joshua, I had no name for him. I had wanted to call him Cherokee, after the Native American tribe, but then someone said that was the label on Tesco's clothing, so it rather put me off. 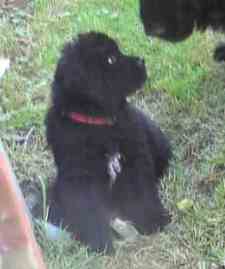 That day I happened to be watching an old episode of the comedy western, Alias Smith and Jones. One of those characters, the really handsome one, was called Joshua and I thought "what a good name for my new puppy."

So Joshua he became and it really suits him. He has often been known as Little Worzel and we still call him the little one, even though he is enormous. He will always be the little one to us.

So what names have you thought of for your new puppy? Newfoundland dog names sometimes become very popular for that particular breed of dog. I have lost count of the number of newfies I have met or heard of called Bear. Personally, I like something different, not only for my dogs but for my children as well. I have never gone in for the latest popular name.

From my experience, you need to be careful. When I chose Ferdinand as a name, I had no idea about a football match or a famous footballer. When I wanted Cherokee, I did not know about a cheap brand of clothing.

When choosing your name, remember that dogs react to sound, not the name itself. If you call two dogs Itsie and Bitsie, the dogs will not know the difference. It is important to choose a name that does not rhyme with anything else, so do not choose one which rhymes with "no", like Noah or Jonas. No is a word you will use often in your relationship with your dog, and you don't want him to be confused.

Avoid names that give the wrong impression. We know that these gentle giants are as soft as butter, but they are massive and they are often black. Some people are going to be afraid, so avoid names like Killer (not that you would) or Caesar, or names that come across as too powerful.

I rather like people names for Newfies, like Joshua. I know two newfies called Norman, and a lovely little bitch called Ebony.

There is a lot to be said in a name. Give the impression that your dog is nothing to fear - a name goes a long way toward this.